skip to main | skip to sidebar

Collecting hockey "south of the border"

My friends give me grief about it.
For years, my city gave up on it.
Around the hobby world, it is generally considered a fourth-class citizen.
It is hockey.
By birthright, I became a Blackhawks fan. Two generations of Campana men of yelling at games on TV and, primarily, radio made that so. Among the four major sports, hockey and the Hawks always have ranked second to the Cubs for me.
That means hockey cards have always been a big part of my collecting life. It certainly didn't hurt when I found an '85-'86 Topps Mario Lemieux rookie card mixed into a mess of commons during my freshman year of high school in 1991.
My dad still thanks me for holding on to it for him all these years.
After the typical layoff from collecting most guys have - the go to college, go broke, meet a girl, get married phase - I jumped back into the hobby in 2007.
Three kids are responsible for my return to card collecting - my son, Ryne, Patrick Kane and Jonathan Toews. 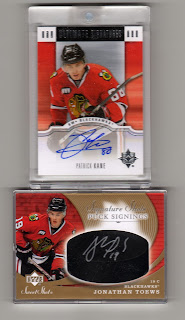 The promise of two highly rate rookies joining the Blackhawks had me juiced to find their cards. Ryne was about to turn three as the 2007-08 season began, so it felt like a good time to begin a collection with Kane and Toews as the foundation.
It quickly became clear hockey not only gets ignored by most American sports fans and media, but also by sports card dealers. For every box of hockey on the shelves at one local shop, there were three or four times as many football, basketball and baseball products.
After nearly five years back in the hobby, I've learned how to deal with the inequities of hockey collecting "south of the border."
Bolstered by two manufacturers now carrying NHL and NHLPA licenses - Upper Deck and Panini America - there are more products to choose from at a variety of prices. There's also a wide range of styles out there, from throwback sets like 2011/12 Parkhurst Champions: 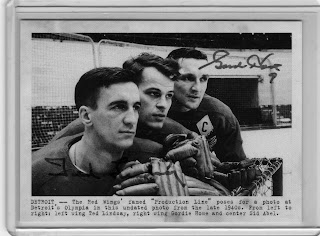 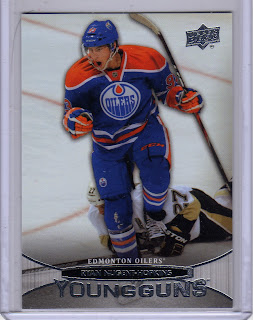 And high-end cards, such as Panini Dominion, with its expensive rookie jersey patch autographs: 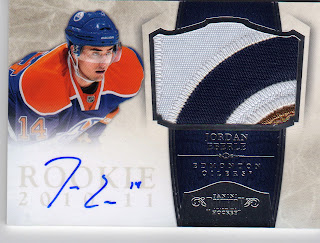 Hockey fans are some of the most passionate in all of sports, and so are hockey card and memorabilia collectors. It's easy to understand why, when you think about all great names in NHL and hockey history. Even hockey jerseys - what us in the U.S. call sweaters - are the best around for unique cards featuring logos and patches.
I'll never be able to walk into a convenience store and find a pack of hockey cards around here, so count yourself lucky if your a fan and collector with that kind of luck. If you do, I'm guessing you're up north.
Just don't forget about your hockey collecting brethren down here.
Just don't forget some of us are here down south.
Campana's Corner is written by Dan Campana, a freelance writer/media consultant, former newspaper reporter and longtime collector living in the Chicago suburbs with a sports-minded 7-year-old and an understanding wife.
Posted by Campana on Cards at 1:55 PM

Check out these folks ...